Grand Pre
...explore the land of the Acadians...

Grand Pre is an absolutely wonderful memorial to the Acadians who first came to Nova Scotia in the 1630s.  They would thrive here for over 100 years until the Acadian deportation started in 1755.  It would last until 1762.  Thousands would lose their homes and livelihoods. 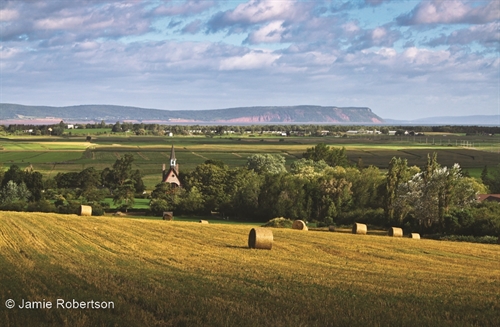 Britain and France were constantly at war during this period and mainland Nova Scotia belonged to Britain in the mid-1700s.  The Acadians wanted to remain neutral so they refused to pay allegiance to the British crown.

The government used this as the reason for the deportation of thousands of Acadians from their homeland.  Grand Pre tells the horrors of the deportation.

I sometimes wonder if it was actually because they wanted their land which was the most fertile in Nova Scotia.  When the Acadians were permitted to return in 1764 the land was no longer theirs as it was given to New England Planters.

The visitor centre is the best place to start your tour of Grand Pre. You should be able to get a map of the grounds which I found to be a big help as we made our way around the site. Tours are also available. 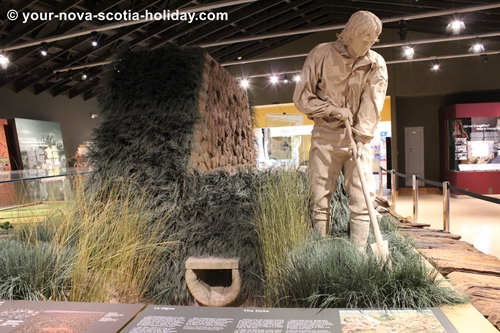 Depiction of an acadian farmer tending his land

Learn about the history of the Acadians and how they made their way to Nova Scotia.  There are inspiring displays of their story including a fully sized replica of the dyke system.  This system was developed by the Acadians to fertilize their agricultural fields using the incoming and outgoing tides of the Bay of Fundy.

A multi-media presentation gives a sobering telling of the deportation which lasted from 1755-1762.  Farms were seized and burned and families were put on ships. Many were sent as far away as France and the Caribbean.

Many settled in Louisiana.  The term Cajun comes from Acadian.

Explore the grounds of Grand Pré.  The beautiful surroundings are a wonderful memorial to the courage of the Acadians.

Just outside the back entrance to the visitor centre is the Deportation Sculpture.  It depicts a mother, father and their 2 children in happy times. 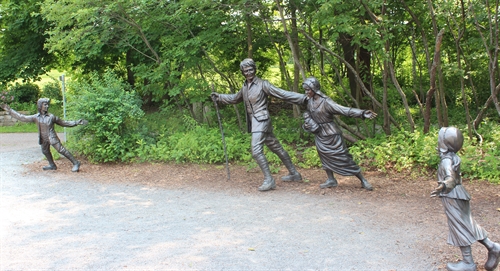 Follow the walking path and it will lead you to the Statue of Evangeline.  Evangeline was made famous by Henry Wadswork Longfellow's Evangeline:  A Tale of Acadia which was published in 1847.  It has been said that this story became a rallying cry for Acadians everywhere.  Not long after, they would reclaim Grand Pré as their ancestral home.

The land surrounding Grand Pre was purchased in 1907 by John Frederic Herbin.  Here he established the memorial church.  Grand Pre would become a National Historic Site in 1982 and UNESCO would recognize this beautiful fertile landscape as a World Heritage site in 2012.

The Memorial Church lies just behind Evangeline.  The church is a memorial to the original Saint-Charles-des-Mines which is believed to have been on this site. 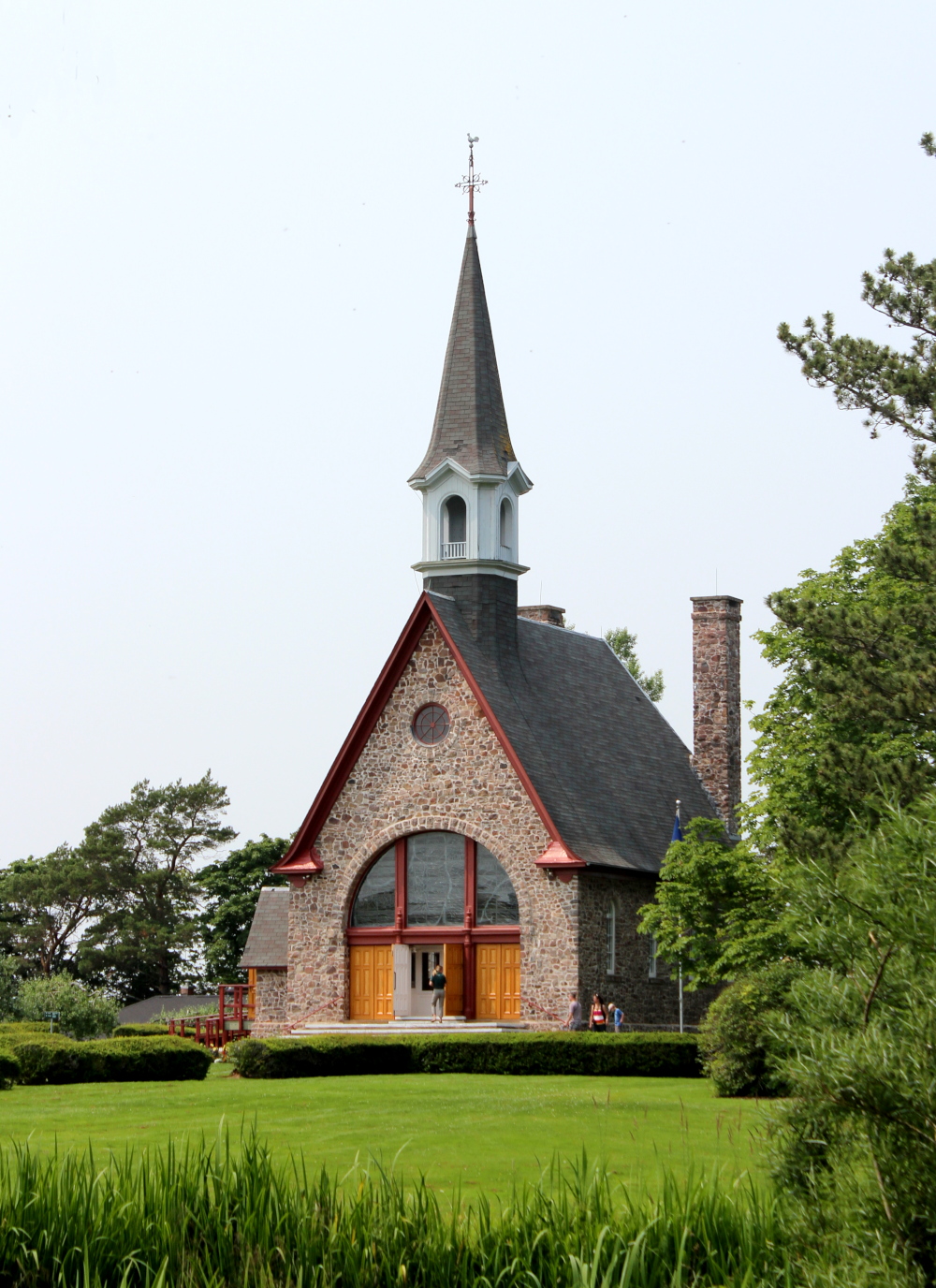 The Memorial Church at Grand Pré

Continue the walking tour and you'll see an old Acadian well, willows that date back to the time of the Acadians, an Acadian cemetery, a bust of Longfellow and beautiful gardens.  The duck pond is especially lovely and relaxing.  Take your time as you explore the grounds of Grand Pré. 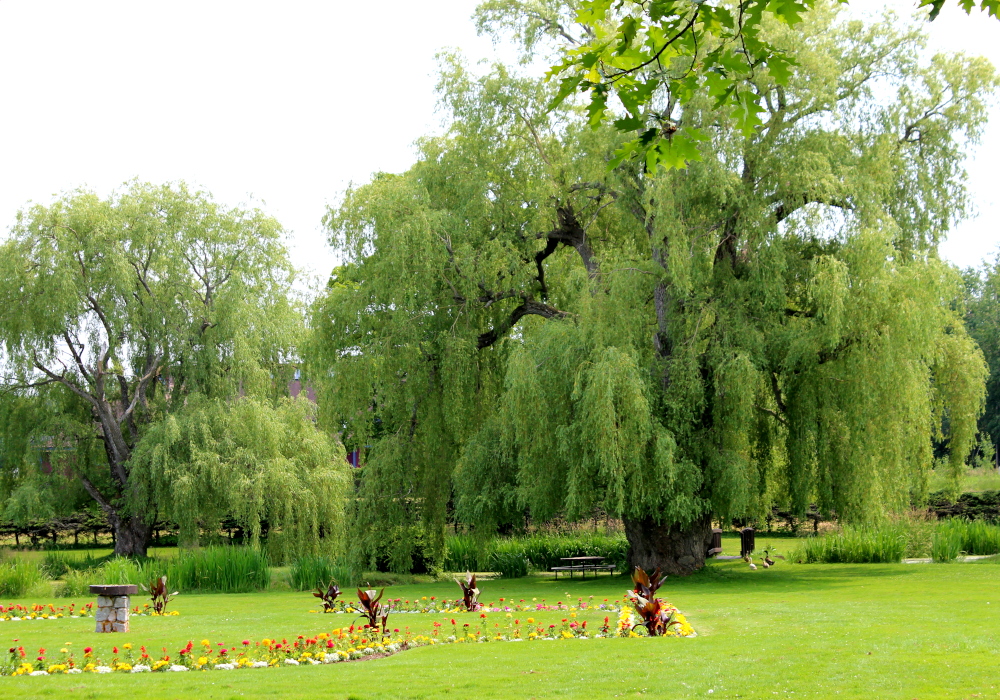 The Willows of Grand Pré

Be sure to make a special stop at the Herbin Cross named after John Frederic Herbin.   The Herbin Cross was built by Mr Herbin in 1909 with stones from the ruins in the area.  A wonderful reminder of what this area means to Acadians. 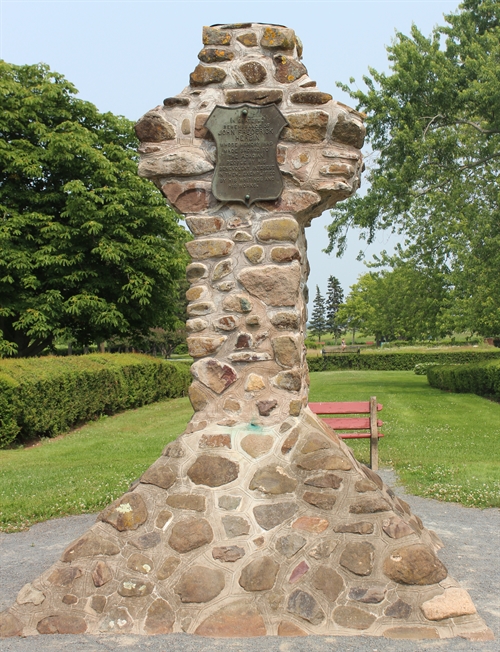 It was a gorgeous hot summer day on my most recent visit to Grand Pre.  The grounds were beautifully maintained and are a wonderful memorial to the courage of the Acadians and the recognition of the horrors of the deportation.

Where is Grand Pré?

The Grand-Pré National Historic Site is located near the town of Wolfville along the Bay Fundy.  It is about 1 hour from Halifax; less than 2 hours from the Digby ferry; about 3 hours from the Yarmouth ferry; and 2.5 hours from the Nova Scotia Visitor Information Centre in Amherst.

Take highway 101 and exit 14 towards Grand Pré.  See the map below to get more precise directions from your location.

Admittance Fee:  There is an admittance fee to enter the museum.  Admission for youth 17 and under is free.

There are many attractions along the Bay of Fundy for you to visit after your trip to Grand Pré.  Check out my page and continue to explore this gorgeous part of Nova Scotia.

The Grand Pré and Wolfville areas in Nova Scotia are beautiful places to spend some vacation time.  Check Trip Advisor for the best hotels and B&B's and the best vacation rentals.

Home Away also has a super listing of places to stay in the Wolfville and Grand Pré areas.

There is a wide variety of restaurants in the Wolfville area. From coffee shops, to pubs, to local cuisine, to pizza shops and bistros with more fancy flare.  Check out Trip Advisor for a complete list. 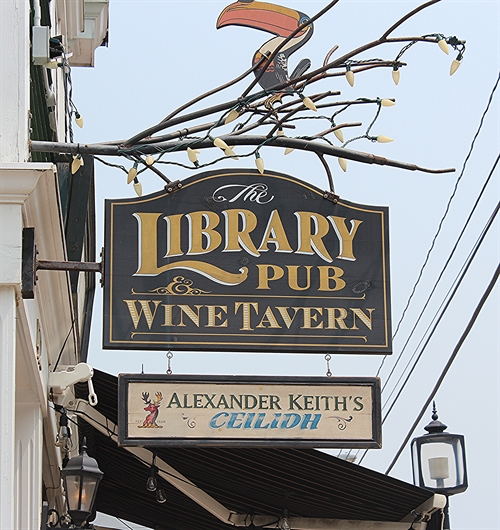 The Library Pub in Wolfville

Have you visited Grand Pré?

Do you have a great story about your visit to this magical place? Do you want to become a part of Your Nova Scotia Holiday?