Wasson Bluff became famous in 1984.  It was here that an amateur geologist, Eldon George, would find the world’s smallest dinosaur tracks.  It was a 3-toed footprint made by a theropod dinosaur about the size of a robin.  He would find many more fossils and minerals but this would remain the most famous. 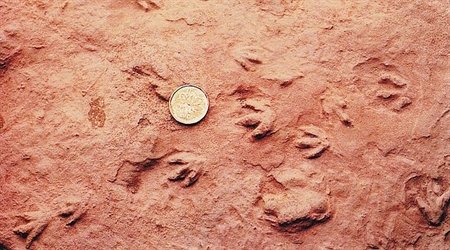 This was also the site of the largest fossil find in North America dating from the Triassic-Jurassic period.  Over 100,000 bones of Canada’s oldest dinosaurs were found at the bluff. This is remarkable.

I read that these cliffs were created when the super continent Pangaea began to break apart about 225 million years ago.  This would have been between the Triassic and Jurassic geological periods. 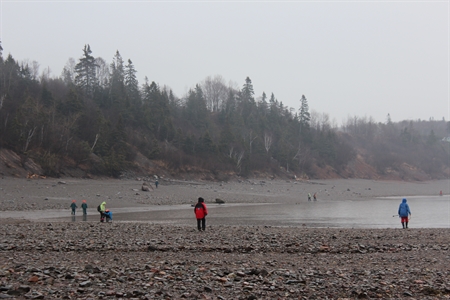 The beach at Wasson Bluff

The map will give you an overview of the area.﻿ 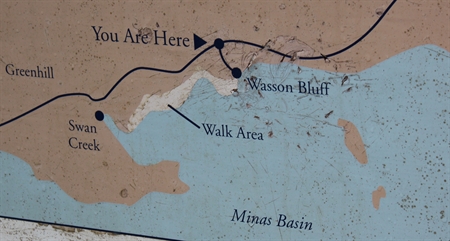 Level of difficulty:  This is not a difficult hike however there is a steep descent at the beginning.  Take your time as there are lots of loose rocks in the path.

Length & time required:  About 1 km; you can roam around for as long as you like but be mindful of the tides.

Clothes/Accessories:  The weather along the Bay of Fundy can be very unpredictable.  Check the weather forecast beforehand. A sweater or light jacket and rain gear are always a good idea.  It can be very windy here and the clouds can move in very quickly.

Sturdy walking shoes or hiking boots are a must; walking stick will help with the steep descent at the start of the trail; and, don’t forget the binoculars and camera.

Facilities:  There are no facilities on this hike. 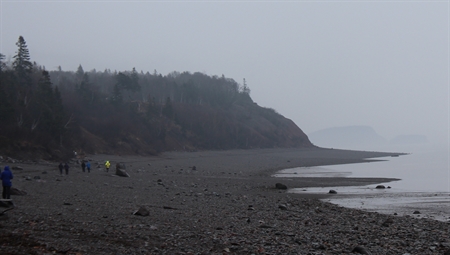 Another view of the beach amidst the fog & rain

You will be directly on the rocky beach after your brief descent from the sign.  You'll see the towering cliffs immediately.  Be careful of your footing!  It can be very slippery along the rocks.

Eldon George would also find fossilized tracks that some believe are from a two-legged, crocodile-like creature that was probably 20 feet long.  The wonderful thing about this area of Nova Scotia is that the Bay of Fundy tides constantly erode the cliffs and shoreline.

This means that new fossils and minerals are being forever exposed. One never knows what might be found in the area. 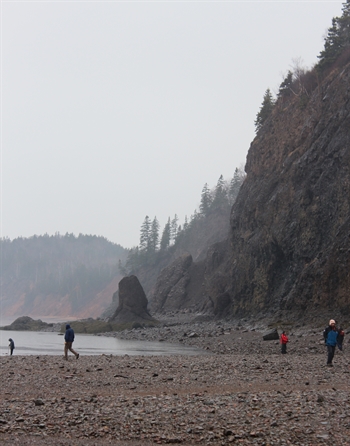 Just beyond these cliffs is Wasson Bluff

Remember, these cliffs contain 200 million-year-old rocks.  This is hard to imagine.  This wonderful magical place is a dream for professional and amateur geologists and rock hounders.

It was rainy and foggy when I was there and the tide was coming in.  The tide kept us from actually getting to the bluff but it was awesome just the same.

Some scientists believe that the breaking up of the supercontinent Pangaea and the release of poisonous gases caused the mass extinction of many of the earth’s creations.  This might have led to the domination of the dinosaurs.

Wasson Bluff is unique because it contains fossils from before and after this mass distinction. 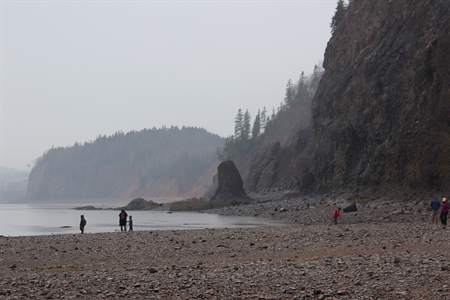 In the 1980s American paleontologists Paul Olsen and Neil Shubin made many discoveries along these cliffs. And some of them would have been a first in North America.

Some of the treasures found include:

Remember that it is prohibited to take fossils from the beach or to break away pieces from the cliffs (not to mention dangerous).  If you do find something that looks interesting tell the Fundy Geological Museum staff and they'll have a look.

I loved my visit to special place. It was damp and rainy but we didn't care.  I felt like we were walking in history.  Indeed, walking with the dinosaurs.

The Fundy Geological Museum in Parrsboro is definitely worth a visit.  Many of the fossils and minerals found at Wasson Bluff are on display at the museum. The Joggins Fossil Cliffs are also an awesome place to visit if you love fossils.

Another hike perhaps?  Why not check out Partridge Island?  There are lots of great places with beautiful vistas on the Bay of Fundy.﻿

Hungry?  I checked out the Harbour View Restaurant (476 Pier Road) when I was in Parrsboro.  Great lobster rolls!  This place has a perfect location next to the beach where there is a awesome view of the lighthouse.

There is also a Tim Horton's at 4019 Eastern Ave.  I also had the chance to have a scallop dinner at the Glooscap Restaurant (758 Upper Main St.).  The scallops were excellent.

Have you hiked at Wasson Bluff?