Maritime Museum of the Atlantic

The Maritime Museum of the Atlantic showcases Nova Scotia's marine history like no other place.  Do you want to learn about the Titanic, Sable Island and the hundreds of shipwrecks in our waters?

What about Canada's role in the Battle of the Atlantic during World War II, the Halifax Explosion or how cable ships were the forebearers of the World Wide Web? Do you have kids who would like to see Theodore Tugboat?

You have come to the right place!! 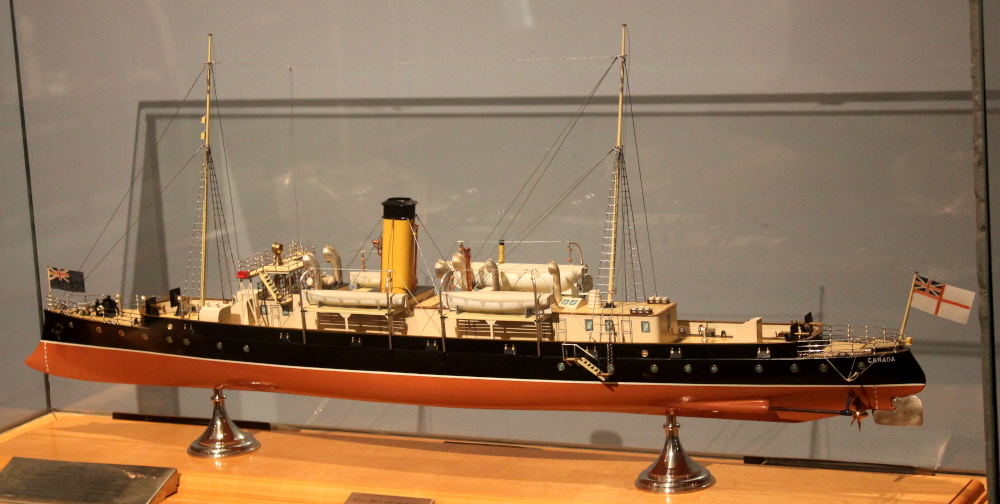 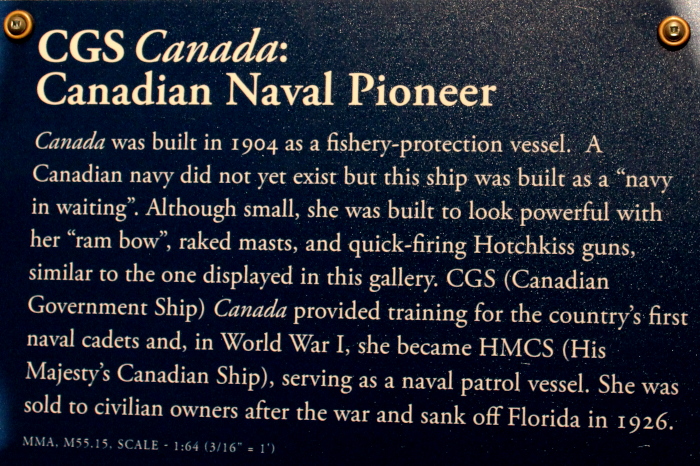 The Maritime Museum of the Atlantic is probably one of the most interesting in Nova Scotia. It is the oldest and largest of its kind in Canada. You will see here that Nova Scotians are fiercely proud of their marine traditions.

So, it is only right and proper that this marine museum be in Halifax. 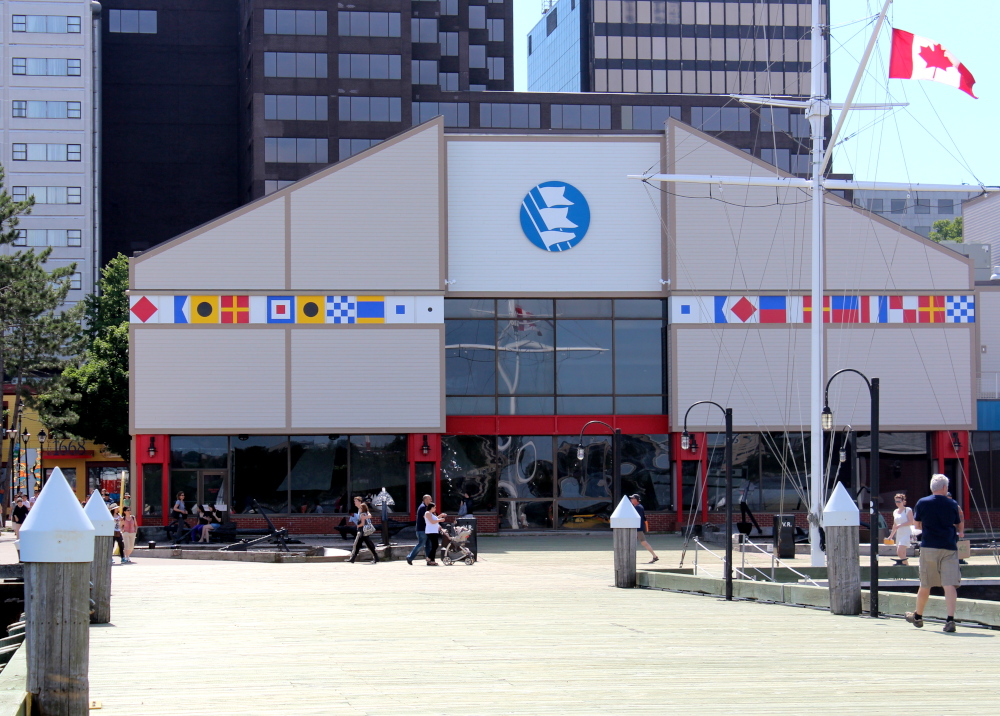 The museum as seen on the Halifax waterfront

After several locations the museum finally made it to its current home in 1982 on the Halifax Waterfront. I think this is a great location because you can spend time roaming around the waterfront and pop into the museum when you wish.  There is even a children’s playground right next door!! 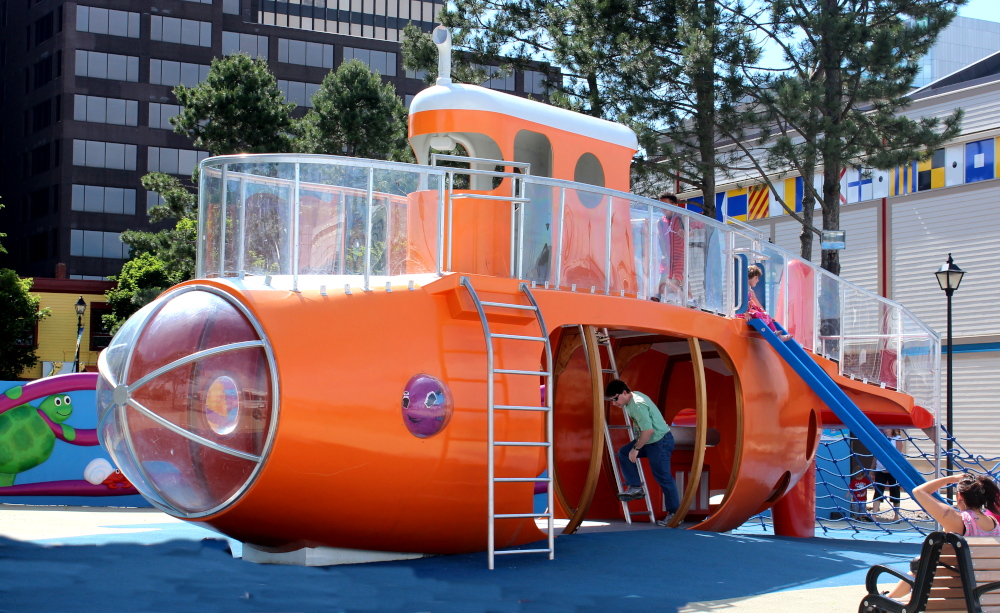 Children's playground located beside the museum

Visitor facilities at the museum are very good. It is wheelchair accessible, has an elevator, and public washrooms.  It has a great marine gift store and you can even rent their facilities for private events. The museum is open every day during the summer but has reduced hours during the fall and winter.

It also offers regular talks and tours throughout the year. The Tuesday Night talks are free.

Take your time to visit the many exhibits featuring Nova Scotia’s marine life including steamships, small craft, the Canadian navy, the age of sail, World War II convoys, shipwrecks, Sable Island and the Battle of the Atlantic. The Maritime Museum of the Atlantic has it all! 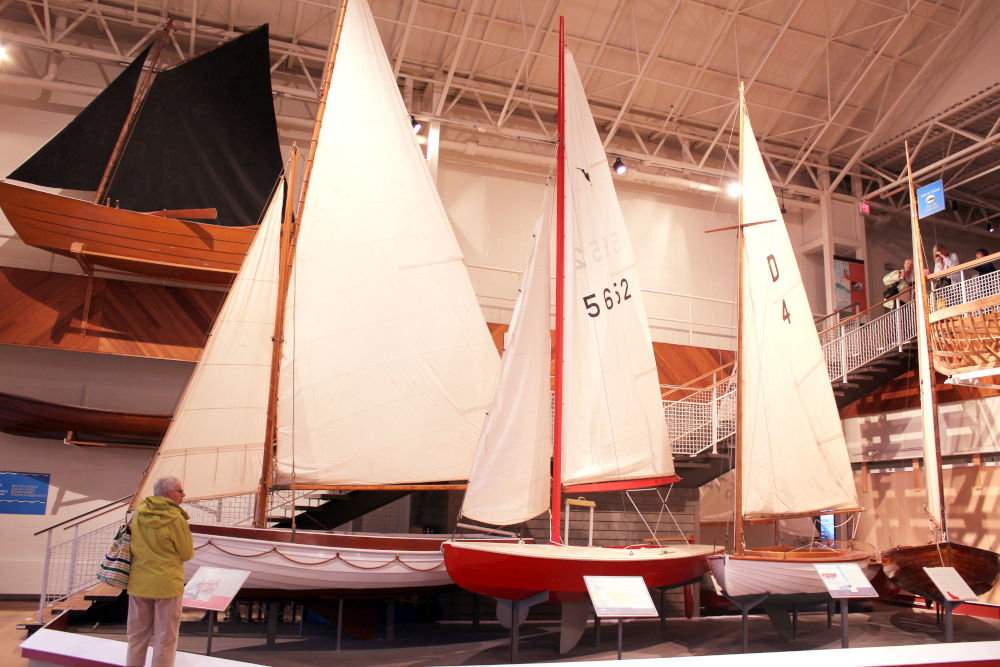 The Age of Sail Exhibit Hall

I really liked their exhibit on the cable ships.  These ships actually laid the first transatlantic cable under the ocean floor from North America to Europe.  Some folks would say that this was the beginning of the World Wide Web!

I think kids would think this was cool.  Cable ships still operate today so...without them would there be an internet?

Cable ships were also extremely important when the Titanic went down.  They were there for the gruesome job of recovering bodies.﻿

Everyone is aware of the Titanic and the iceberg that it hit in the North Atlantic on April 12, 1912. What many people might not be aware of is the connection between Halifax and the Titanic.

Check out my Titanic & Halifax page and see what I mean!  The Maritime Museum of the Atlantic has a permanent Titanic exhibit and it is a must see!! 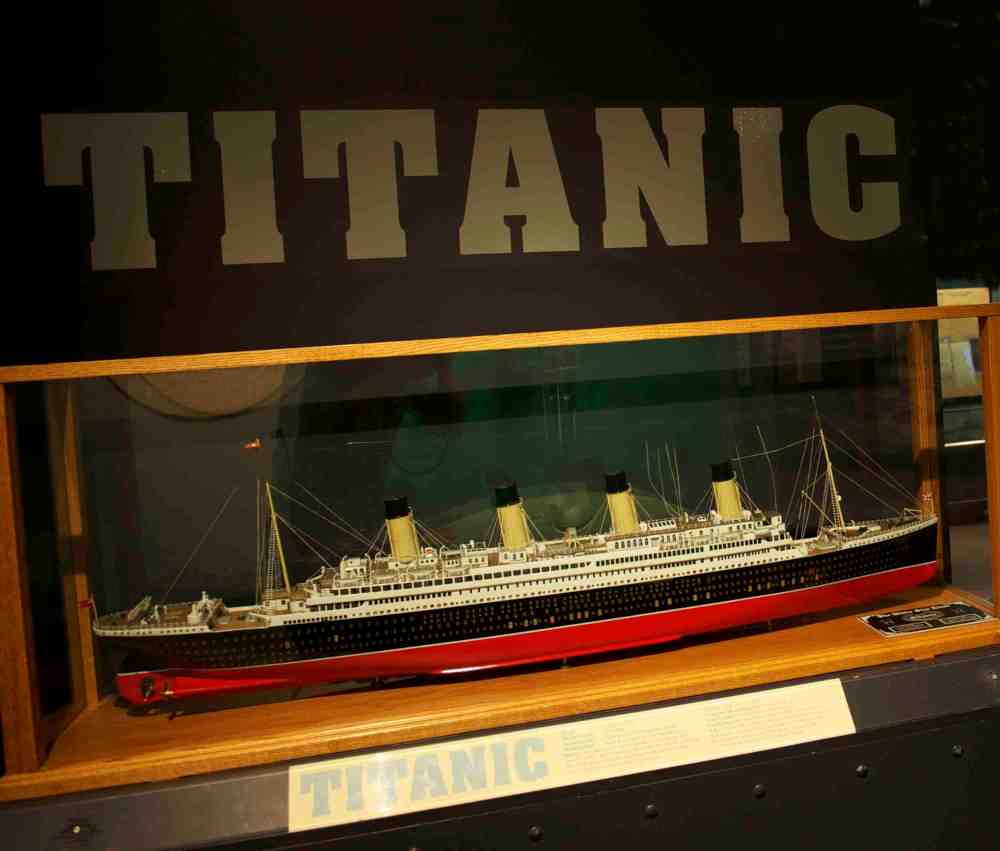 You will probably see this ship soon after you arrive on the waterfront. It really is a floating museum and has a played a vital role in Canada’s marine history.

The French called Nova Scotia ‘Acadia’ and the CSS Acadia carries the name with great pride. It was at one time a scientific ship and then a survey ship.

It was the CSS Acadia that chartered the coast of Newfoundland after it joined Confederation in 1949.

She also served the navy in both world wars and is the only surviving ship to have this honor.  She is also the only vessel left that survived the Halifax Explosion in 1917. The CSS Acadia was designated a National Historic Site in 1976.

She is now a museum ship and welcomes visitors for tours all summer long. I think it is especially wonderful when youngsters visit the ship and hear stories of when she defended our shores.

The CSS Acadia celebrated her 100th birthday in 2013 and is definitely worth a visit.

Another museum ship that proudly sits outside the Maritime Museum of the Atlantic is the HMCS Sackville.  The Sackville is the last surviving Flower-class escort corvette that served in the Royal Canadian Navy.  She has a long and proud history as a convoy escort vessel. 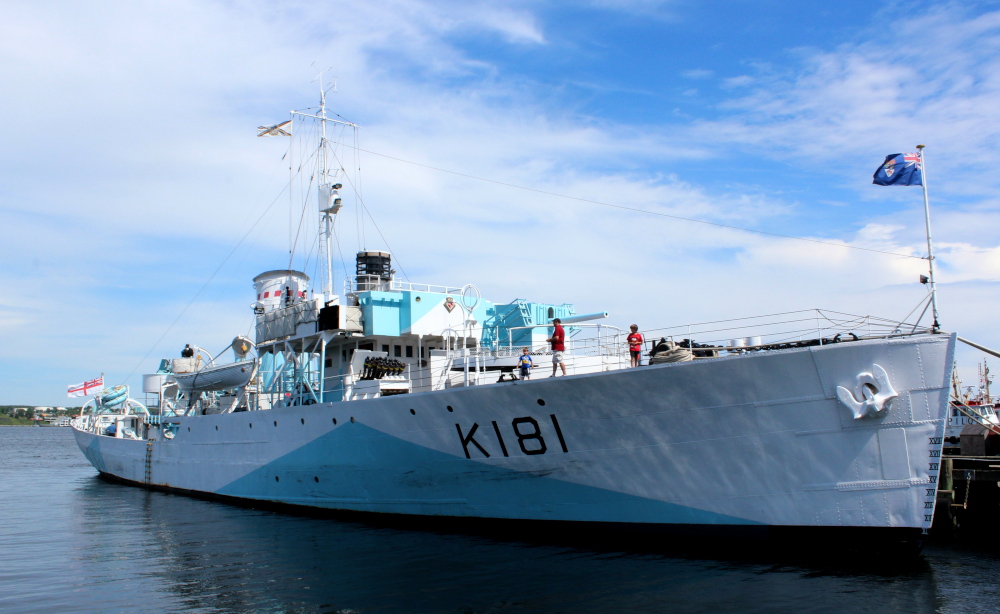 This ship is authentic from World War II and proudly served during the Battle of the Atlantic.  I love to visit the Sackville and the stories of its history are great.  She was part of 41 convoys that crossed the Atlantic during the war and was certainly an important part of the Canadian war effort.

There is currently a project underway for a permanent naval heritage site built around the Sackville.  Once complete it would be named Battle of the Atlantic place.  Stay tuned and I’ll bring you updates as the project moves ahead!

Another exhibit that deserves a visit at the museum is the Halifax Explosion of 1917.  Only 5 years after the Titanic, this explosion would forever change Halifax.

On December 6, 1917 the French munitions ship, SS Mont Blanc collided with the Norwegian vessel SS Imo in Halifax harbour.  The resulting explosion killed 2000 people and injured 9000.  Almost all structures including residential neighborhoods and a Mi'Kmaq First Nation community were destroyed by the explosion and the resulting tsunami. 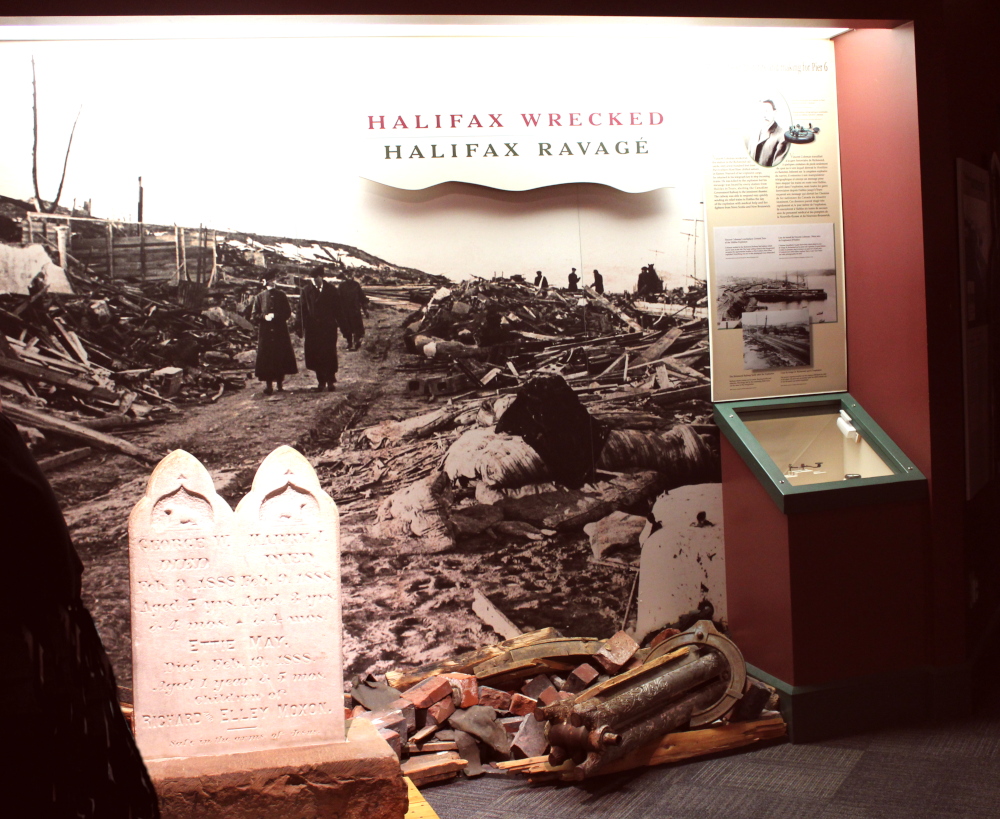 Theodore Tugboat in the Maritime Museum of the Atlantic

I am sure that many of you might remember the award-winning children's television called "Theodore Tugboat".

Well, Theodore and his friends from the harbour have a permanent home at the Museum of the Atlantic and is a very popular exhibit with the kids. This is a great way to get the small ones into a museum.

I was very impressed with the exhibit.  It is bright and very colourful.....it will bring a smile to your face.

I loved my visit to the Maritime Museum of the Atlantic.  I was there for a full day.  Took a break and had lunch at Anna’s cafe.  Spent the rest of the afternoon there and then headed off to the Old Triangle Pub for some dinner and a cold one!

Location:  The museum is located on the Halifax Waterfront at 1675 LowerWater St.  It is located beside the Visitor Information Centre (VIC).

Admittance Fee:  There is an admittance fee to enter the museum.  Children under 5 enter for free.  Entry fees are reduced during off-season months.

Check out my map of Halifax to find the location of the museum.

Have you visited the Maritime Museum of the Atlantic?

Do you have a story about your visit? Share it with us!