Cape Breton Miners Museum
...a MUST see for everyone...

A visit to the Cape Breton Miners Museum in Glace Bay and a trip underground to a real coal mine is a MUST DO activity for all visitors to Cape Breton AND for folks who live in Cape Breton as well. 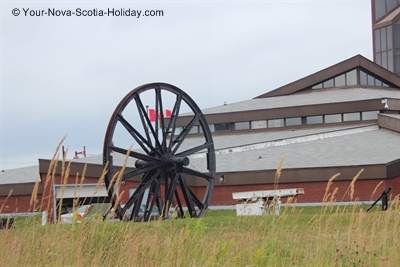 A Bull Wheel & the museum in the background

My grandfather was a coal miner for 35 years. He died with a black lung. Many of the fathers in my neighbourhood were coal miners. I am thankful that my father was not. Even though he wasn't a miner we lived in an old coal company house.

We always knew when the annual miners vacation started, we always marked Davis Day and we were always aware when there was an accident in one of the mines. 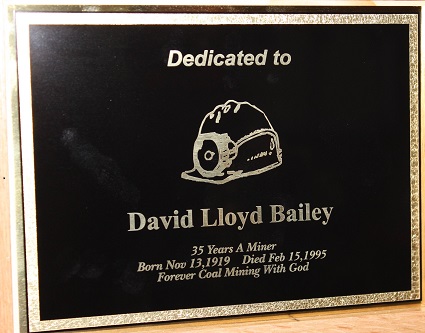 Plaque dedicated to my grandfather on the Miners Memorial Wall at the Cape Breton Fossil Centre, Cape Breton

The Ocean Deeps Colliery at the Miners Museum in Glace Bay is a real coal mine and it depicts what it was like to work there in 1932.  It is very safe now but back in 1932 it was not.

What makes this trip even more special?  A retired coal miner will be your guide. Ours was Abbie, he was 76 years old and he had lots of stories.  There were quite a few teenagers in the group and I watched them. They did not miss a word he said. 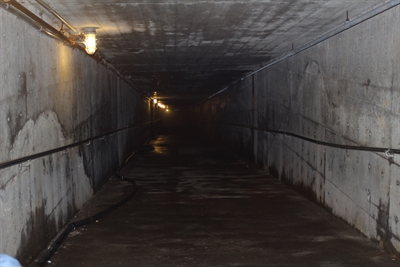 Entrance to the Ocean Deeps Colliery

This trip underground is not for the meek and mild.  You will wear a miners hard hat and cape.  It will be dirty and wet.  The ceiling will get lower and lower and you will need to bend over to keep going.

Yes, you will keep going because turning back is not an option ......it wasn't for the coal miners that worked here in 1932.

Also listen for stories about the young boys that worked underground.  It is hard to imagine that boys as young as 9 years of age would work in a coal mine. 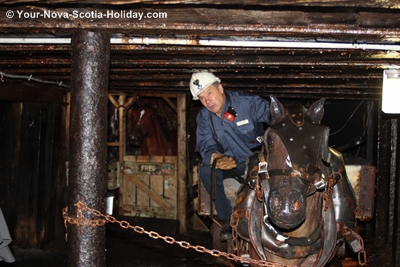 Ponies were used in the mines. They were called Pit Ponies.

When you walk back to the top it will be a relief and you may feel a bit odd.  I was actually quite disoriented.  It was an experience that I will never forget.

There has been coal mining in Cape Breton for hundreds of years.  Immigrants came from Poland, England, Hungary, and many other European countries to work in the mines.  Many did not speak English when they arrived. Boys as young as 9 would work in the mines.

They worked because their families needed the money. Perhaps the father had been injured or killed in the mine.  There was no employment insurance or social assistance in the early part of the 1900's so the young boys needed to go to work.

The work week was 6 days and many did not see the sun until Sunday.  They went into the mine before the sun rose and came back out when the sun went down.

It was a tough life but they did it because they had no choice. 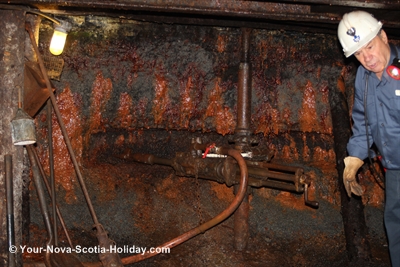 Machinery was used to blast the coal face, it was then dug by shovel 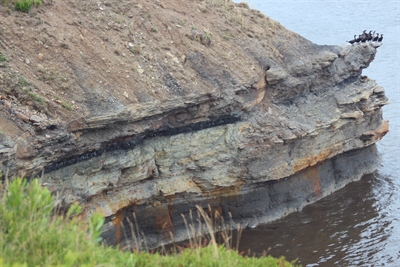 See the black seam in the cliff, this is a coal seam.

The coal company owned everything in the town.  The mine, the general store and the houses were owned by the company.  So, your bill from the general store where you bought your food and clothes came off your paycheck before you actually got paid.

Your rent for the company house was also deducted.  Coal was used to heat those houses so that was owned by the company too.  Basically, the company owned the town. They had complete control. 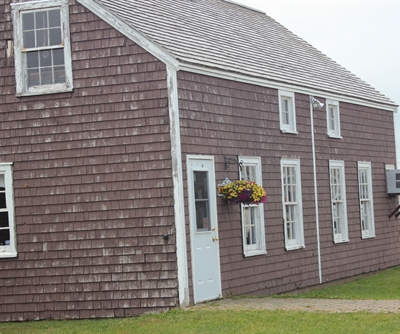 A company house now used as a restaurant at the museum

Over the years and after many fights and strikes the coal miners began to gain some benefits.......

After our tour underground we browsed around the miners museum. It told the story of the miners' way of life through words, pictures and artifacts.  The museum is very well done and extremely interesting.

The museum tour really continues outside.  There are massive pieces of machinery on the grounds showing the equipment that the miners worked with. 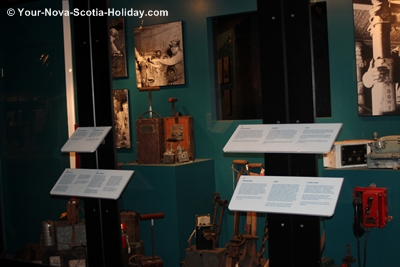 Artifacts inside the museum show the coal miners way of life

Be sure to go down to the cliffs for a walk.  Take a close look at the cliffs and you'll see the coal seam running through it.  This is what the miners mined. 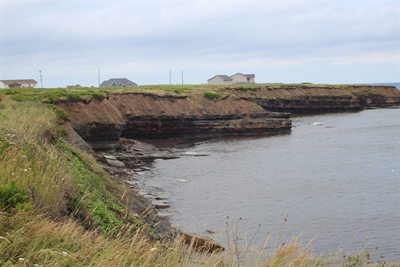 The cliffs showing the coal seams outside the museum

Location: The museum is located at 42 Birkley St. in Glace Bay, Cape Breton.  Check out my map below to see the exact location once you arrive in Glace Bay.  To get to Glace Bay take highway 105 as you enter Cape Breton Island at the Canso Causeway.  Follow the signs for Sydney then Glace Bay.

Close by:  The miners museum is 60 km (37 mi) or about 1 hour from the Fortress of Louisbourg so visiting both on the same visit is a great idea. My location map for the fortress will give you directions of how to get to Louisbourg from Glace Bay.

The museum is open daily (from 10am) during the summer.

After Nov 3 it is open Mon-Frid.  Underground tours must be booked beforehand 902-849-4522 or info@minersmuseum.com.

Admittance Fee:  There is a fee to enter the museum and also a fee to take the underground tour.  Family rates are available.

Services:  The museum has a gift shop where you can purchase souvenirs.  There is a small restaurant on the site.  Be sure to walk around outside and see the huge artifacts. The museum is located on a cliff overlooking the Atlantic Ocean and there is a short walking trail.

Glace Bay is a full service town with numerous restaurants, accommodations and shops.  Glace Bay is also home to the Savoy Theatre. The Savoy is one of best performance venues in Cape Breton.

Men of the Deeps:  The Men of the Deeps are a choir composed only of coal miners.  This may seem odd and it was back in 1967 when they were formed to celebrate Canada 100th Birthday.  They perform at the Miners Museum throughout the summer.