The best way to explain options to travel to Cape Breton is to look at a map.  Cape Breton Island is located at the north eastern tip of the province of Nova Scotia in the eastern part of Canada.  You can use the + or - signs on the google map below to zoom in or out.

You can see from the map that it really is an island and is attached to the mainland by a man-made causeway called the Canso Causeway.  There is a swing bridge just before you drive onto the island.  The bridge allows boats to travel through the Stait of Canso on their way to the Bras d'Or Lakes in the interior of the island. 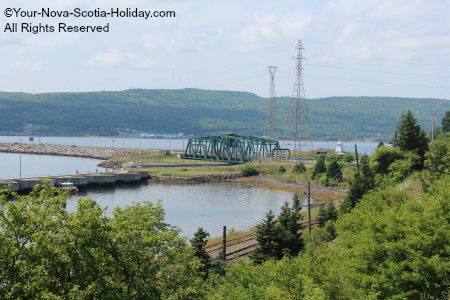 Options for travel to Cape Breton

Most visitors travel to Cape Breton by car and, of course, the only entrance point by car is the Canso Causeway. To get to the Canso Causeway, follow the Trans Canada Highway 104 as you enter Nova Scotia in Amherst.

One of the things that you will notice right away is the signage along Cape Breton roads!  Always clearly marked!! This one below indicates Route 19 along the western side of the island and the Ceilidh Trail.

You will notice that there is a Visitor Information Centre at Port Hastings as soon as you cross the causeway.  Watch for the signs.  The centre will be on your right. 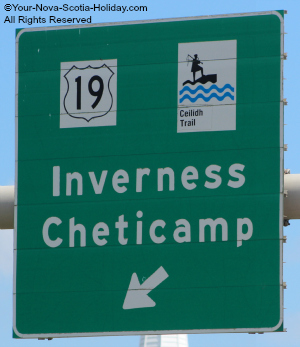 There are 2 ferries that travel to Cape Breton from Newfoundland. There are operated by Marine Atlantic and reservations are absolutely necessary!

Both ferries arrive in North Sydney.

There is only one airport which is located in Sydney. The J.A. Douglas McCurdy Airport in Sydney is small, however, it is a major gateway to the island with regular flights from Halifax. A flight from Halifax to Sydney takes only about 40 minutes.

The airport is only 15 minutes from downtown Sydney.This is perfect if you feel the need to rest before starting your Cape Breton vacation.

If you do plan to travel to Cape Breton by air you will probably want to rent a car. There are two car rental companies at the Sydney Airport: AVIS and Budget. Check out their webpages and make reservations directly on-line.

Cruise Atlantic Canada is the best place to find a cruise from New York or Boston headed to Cape Breton. Cruises to Nova Scotia are part of the Canada/New England cruise itinerary. Over 20 cruises visit Nova Scotia between April and November each year.

Cruise ships that travel to Cape Breton dock at the port in Sydney and many go to Baddeck as well.

From Sydney or Baddeck, you can take day trips to the Cabot Trail, the Alexander Graham Bell Museum, the Miners Museum or the Fortress of Louisbourg, just to name a few!

The Big Fiddle at the Sydney dock greets all cruise line visitors!! 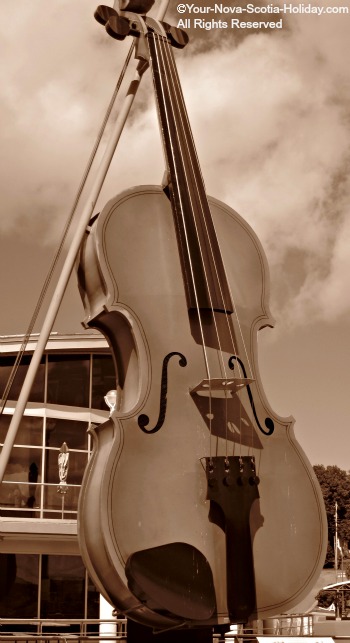 44 Awesome Things on the Cabot Trail

I have a great e-book called 44 Awesome Things to see on the Cabot Trail (+ 17 tips for along the way) that might interest you.  This book is an awesome reference for touring the Cabot Trail.  I include all of my favorite spots plus much more!